Even after farmers left the farm after WWII,  farmers made up a fairly substantial part of the labor force. Many urban dwellers were connected to the farm through family. It was common to know a farmer; they were cousins, grandparents, or other relatives, who more often than not lived within a day’s drive of a city. Farms were diversified; they raised several animals that provided meat and milk for the family. The farms raised a bit of produce during the summer months, further diversifying the income stream as well as providing the sustenance for the family. Food was canned or preserved for the family. Excess was sold at tailgate or framers markets.

Tarheelbilly Farm doesn’t grow a ton of food for the local farmer’s market and community. We decided that it wasn’t financially workable to attempt to do so, and have focused on growing for our family and will sell the excess only after we’ve fed ourselves first. Why not feed the world? With so many going hungry in our community, why won’t we jump in and work voraciously to feed all of Southern Ohio? Why not compete?

The truth is, if we tried, we’d go broke trying to do so. An alarming small number of people who make their living as farmers (roughly 1% of the population of the US).  Most farms are no longer able to support families as the sole source of income. 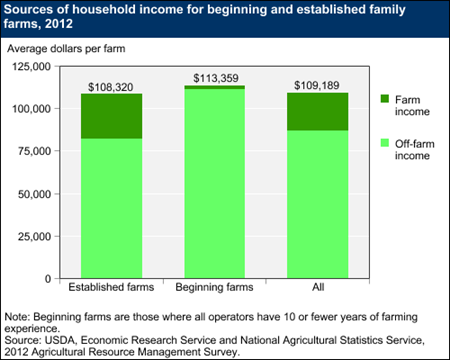 Source: USDA. Note: this information is compiled based upon US Census data. 2012 is the lastest date of compilation.

Farmers who grow for the commodity market face an even more difficult series of impossible choices in order to be profitable. (Commodity farms produce products that make up the backbone of the American food supply. Corn, soybeans, and wheat are some of the major commodity crops that the US produces. Beef, pork, etc. are also considered commodities.) The profit margins are so small that many farmers, even large ones, LOSE money or barely break even. Just three companies control over two-thirds of US soybean processing. Five control 85 percent of it. The picture isn’t much better in corn. With so few options for farmers to sell their products, they are at the mercy of tightly controlled market forces and are marginalized at every phase of the production process.

From “Ag Cycles: A Crop Marketing Perspective,” by Chad Hart of Iowa State University
What does this mean in real terms? Well, it means that most farms are NOT profitable, and many of those who are remain marginally so. Efforts to recruitment will remain fruitless as long as farmers must work two jobs in order to afford to farm.
We at Tarheelbilly Farm feel the pressure, too. We pay retail prices and taxes for all costs of production– feed, fuel, tools, jars, labels– the list is endless. We sell our free range eggs for $3.00 per dozen when others sell theirs for $2.00. We have seen them for as low as $0.50 per dozen on sale at the grocery store. As it stands, we lose money on each dozen. The true cost of production is closer to $4.00 per dozen, but few around here are willing to pay that. (I won’t say ABLE– there are rivers of Mountain Dew and islands of pizza here in the Tristate, so I do believe that it comes down to a matter of personal priorities.)
There are too many broken parts to our food supply chain that they cannot possibly be covered in a blog post. Suffice to say, we hope that better policy making at the state and federal level will make it easier for farms to get good food into the hands of people who seek it. Until then, we’ll continue to be a small, diversified farm with small, artisan level goals. We’ll raise a few things well, and sell directly to those who seek quality and appreciate the care that we give the plants, animals, and land that we’ve been blessed to steward. We’ll leave feeding the world to the big boys.
-Charis

The chickens aren't the only ones who enjoy the privacy of nest boxes. 🤷🏽‍♀️
Here's 10 seconds of calm for your feed! It's maple season, so I was out in the woods helping the Mr. with the maple lines. Most of our property is hilly and wooded, so making maple syrup is a wonderful way to use the resources we have.
Joy is a two year old ewe. Her dam, Jo, was one of my foundation ewes, and Joy is the only ewe she has given birth to. I am looking forward to seeing her babies in March. She is as cool as a fan, posing with a single blade of hay hanging from her mouth.
Peggy's red hair sure stands out against the brown leaves. We're all grateful for today's sunshine.
I am not a seamstress, but I am proud of the little labels I am sewing onto my farmstead wool throws. I remember wonder I felt the first time I touched yarn made with fiber from my very own flock. Sleeping under a wool comforter made from wool from my flock is like receiving a hug from them. 🙂
I think the 3 amigas are pretty happy to see the sun shining this morning!
Follow Tarheelbilly Farm on WordPress.com
Join 832 other subscribers

https://www.etsy.com/shop/TarheelbillyFarm
All photos, videos, and other content are the property of Charis and Ben Walker. They may not be used or shared without written permission.
%d bloggers like this: